As Jeremy has stated in our previous post (“How the Pareto Principle Can Give Us All the Wisdom of Solomon”), the Pareto principle has been used for many years, whether implicitly or explicitly.  In that post we showed how Solomon and others could have (and probably did) use the Pareto principle to make many of their decisions.  Although this post focuses on current applications in our daily lives, it is important to begin with a couple of very brief technical points.

Going back to more recent history we find Vilfredo Pareto making the observation of the 80-20 principle, in 1906 and publishing it in 1909.  This 80-20 principle was later generalized and renamed the “Pareto principle” by Joseph M. Juran.  In 1905 Max O. Lorenz came up with the Lorenz Curve, which is basically a graphical visualization of the Pareto principle, which was first used to show the distribution of the concentration of wealth. (Publications of the American Statistical Association, Vol. 9, No. 70). In 1920 the two principles were pulled together by Dalton. In 1992 Joseph Persky wrote a great article about this in The Journal of Economic Perspectives.

Goldratt pointed out that when a Pareto chart is created, we often create column for options or problems (or causes of problems) that are linked.  For example, in the previous charts, “increasing military spending” was needed by David and Solomon in order to secure an important copper mine just beyond the south east corner of the Dead Sea, but having more copper mining was needed in order to lower the cost of equipping an army as well as for boosting the economy.

Goldratt explained that in these situations, squaring each contributor produces :

Once each column is squared, a new 99-1 principle should be used instead of the 80-20 principle.  Doing so produces the following enhanced Pareto Chart for King Solomon’s options.  For further reading on the 99-1 rule and these “enhanced” charts, we recommend Dr. Lisa Lang’s website:  http://drlisamaxprofit.blogspot.nl/2007/04/991-rule-vs-8020-rule.html and George’s own site http://www.tomm.nl/theory-of-constraints/ which contains a video of Dr. Goldratt.) 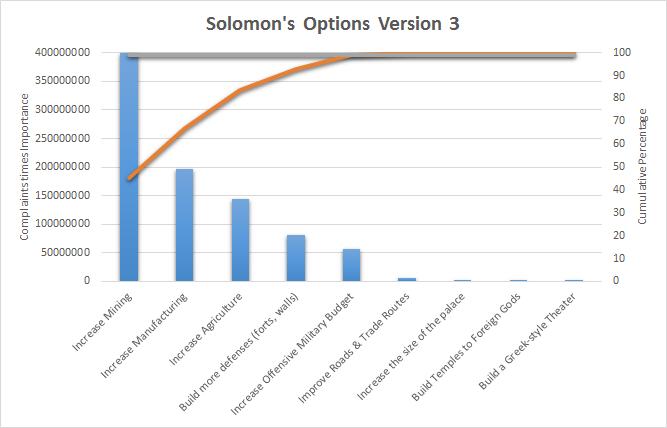 In this enhanced Pareto chart, “increasing mining” really stands out as the most important item, but “increasing the offensive military budget” which is linked to mining remains within the “critical few.”

As previously stated, these techniques are not simply for the past.  High quality decisions making is the heart of all project management systems.  “Managing Successful Programmes (MSP)” is one such system.  Its effectiveness is what convinced the British government to use this system (containing Pareto charts) as they planned and operated the 2012 Olympic Games in London.  The Project Management Institute (PMI) also recommends the use of Pareto charts and requires knowledge of them as part of their certifications.  Pareto charts are also part of the body of knowledge for ASQ’s and IASSC’s Six Sigma Certifications.

One point that was not brought up earlier is that when Design of Experiment is possible (such when optimizing control variables in a chemical factory), the results of the multi-ANOVA analysis can directly be used as the weighting factors.  In situations like these, quality engineers and operations analysts do not have to estimate the importance or impact of a particular factor.

For now, let’s leave the theoretical history lesson and certification requirements – a lot has written about these subjects.  Wikipedia, www.pmi.org, https://www.axelos.com/, www.asq.org, www.opensourcesixsigma.com and www.sixsigmastudyguide.com are some excellent sources for continued reading on these topics.

But, Pareto in daily life – now that should be interesting!

While brainstorming with Jeremy about this subject I came up with some areas in business where the Pareto principle and chart are (and should) be used.  I also thought of a fun non-business example!

For entrepreneurs, let’s start with a basic question.  What do our customers value?  Let’s build a questionnaire of about 10 pointers that we think our customers might value about our company.  Now let’s send it out and see what we receive back.  I’m confident that if the pointers are realistic and the number of respondents is large enough, there there will be three pointers that will stand out (matching the 80-20 principle).  This can be a great way to refine and grow the positive aspects of a business image or to find areas for improvement.  (For Six Sigma insiders, this is also known as the big Y that’s under hypothesis in the Define phase of DMAIC.)

For managers, what are the reasons my key performance indicators (KPI’s) are under pressure?  This could be a tricky one.  If we find that the reasons for the low performance are interconnected, we’ll have to look at the 99-1 rule as well.  If that happens (which is highly probable) then we need to:

In spite of that apparent difficulty, this is the actually the area in which the Pareto charts are most needed and most useful!  This is true for many reasons, but the biggest is simply our inability to fix everything – decisions must be made to fit both the current budget and time constraints. This is also where most mistakes are made.  As Jeremy has pointed out, we must carefully balance “long term” and “short term” solutions.  Often the current reality seems to be the worst we can imagine, so we try to use most of our resources to fix the problems that are NOW.  Looking back over the past decade, a lot of managers would’ve made different choices, if they could’ve seen further over the horizon.

If you are a team leader or a coach, you might ask, “Which skills should be developed or enhanced within my group of employees?”  You could begin by making an index of the skills that your team needs, and then determining the current skill levels for of each of those skills (either for individual employees or for the team as a whole).  Then comparing those levels to the desired levels would create a quick and easy Pareto chart showing where to focus employee training.  (Note from Jeremy:  I believe that this what my own supervisors did at the end of last year when they designed this year’s faculty development days and when they selected which technologies to focus on during our technology training days.  They began with a technology self-assessment survey.)

Following these lines, I asked Jeremy about how his teaching philosophy has changed due to the new government teaching standards that he has to follow.  He explained that the new standards place a lot of emphasis on how mathematical functions relate to each other and how changing one small number in a function changes the resulting graph.  He also explained that some topics (such as basic trigonometry) appear to be of low importance in his particular course’s standards but are in fact very important due to the high number of real-life problems that involve basic triangles.  When I pushed him further, he then explained that after discovering these ideas he then met with a coworker and after their meeting they used their new insights to rearrange the mathematics topics into a new order that neither of them had used before.  Below is a Pareto chart showing the information that made him a better math teacher. The following improved chart was created using weighting factors based on “how bad” a type of food is for a person.  It clearly shows that removing alcoholic beverages (even just a few) is the most important place to begin, followed by sodas and sweetened beverages.  Limiting greasy and starch filled foods (like pizza) is still important, but no longer at the top of the chart. 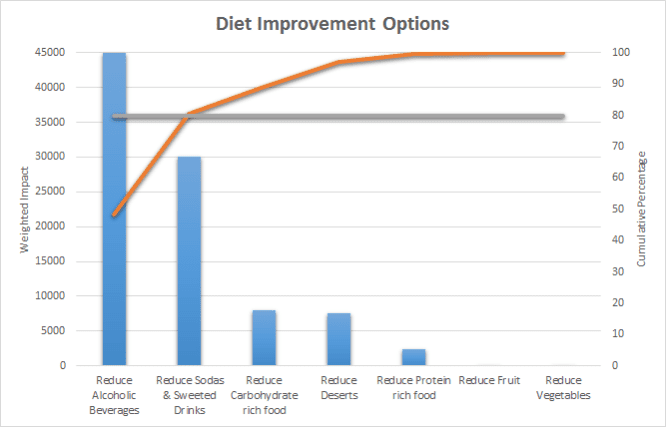 But Pareto charts to not have to be as technical as this!  They can be FUN!  Here’s a quick and fun one for people who would like to lose some weight.  Simply eat 20% of your “regular food” and 80% of what currently makes only 20% of your diet.  For most people this would mean that the pizza ratio would go from 1 every other night to 1 every other month.  The same thing could happen with apples; switch from 1 every other week, to two per a day.  I am quite sure that this kind of a diet switch will have a dramatic effect! 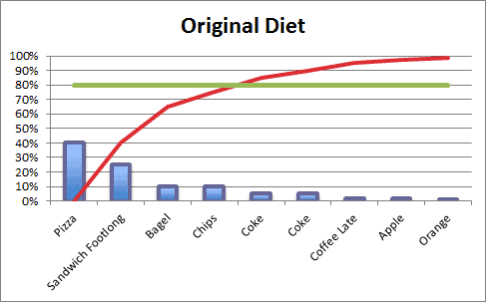 Please note that we are not recommending that coffee and coke each be 10% of a person’s diet – a balanced diet is important – but as the diagram shows, decreasing pizza and increasing fruit is good for a person’s health and makes for a great graph! In the Netherlands I know of people who almost completely stopped eating things like meat, bread and drinking milk. Also they stopped eating products that contain sugar. Aside from some “super foods,” such as nuts and coconut products, they actually made the switch using the Pareto principle. 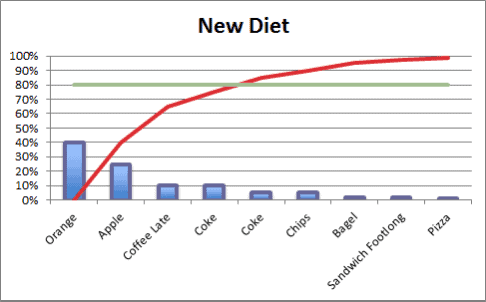 As shown here, Pareto charts can be a very powerful tool in any important decision making process and they can even be fun and easy!  We (Jeremy and George) have shared many of our ideas with you, but we would both love to hear more about your ideas and your stories.  Perhaps you used a Pareto chart to decide how to spend your money?  When building (or remodeling) a house perhaps you used one to decide which features to include and/or how many square feet to include in different parts of the home?  Your thoughts, comments, stories, and ideas would benefit us all, please share and please feel free to ask either of us questions.

George Dekker is first and foremost a TOC evangelist, Lean enthusiast and lover of the human mind. He is an IASSC certified Lean Six Sigma Black Belt. He also has TOCICO certificates covering many aspects of the Theory of Constraints (specifically: DBR , TA, CCPM , and Thinking Processes). Following the footsteps of Eli Goldratt, he asks the questions that make you think. His recent articles were “Walls of Distrust, Apathy and Politics Are Signs of a Good Company”, “Resistance to Change Is Good” and “Is Efficiency Enemy Number one?”  These and other powerful articles are available on his webpage at: http://www.tomm.nl/articles.

Jeremy Garret is the author or coauthor of the several original posts in this series, and proponent of using quality assurance tools in new fields, especially in the education industry.  He has a master’s degree in curriculum and instruction (with specializations in integrative STEM education and engineering design).  He holds a second master’s degree in applied physics, both from Virginia Tech.  He is also an ASQ certified Quality Process Analyst.  He is currently a mathematics teacher in the state of Alabama (in the USA).

sir,
you have given a good information

In our daily lives, we can and should use this in many ways.

For example, when considering which of several repairs or upgrades to complete on a used car one should consider the price of the repair, the amount of improvement in the performance, reliability, and appearance that the repair or upgrade will produce. I once met someone who spent $300 on replacing a sensor that made the low fuel light come on. Since this light was a reminder of what was already/still indicated by the fuel level gauge, the amount of gain was very small. That same $300 would have paid for a cheap, but usable set of new tires for that same vehicle. The cost was the same, but the gains were very different. Even without making a chart, the underlying concept of the Pareto Chart / decision making process would have helped this friend “get the most for his money.”

I am not certain what you mean by “macro operations” in this context. If you tell me more about what you wish to know, I will try to help.

This site uses Akismet to reduce spam. Learn how your comment data is processed.

Do the Work, Pass Your Exam, or Your $ Back.

100% of candidates who complete my study guide report passing their exam! Full refund if you complete the study guide but fail your exam. This is your 100% Risk Free option!